We are thrilled to have our holiday decor featured in the November issue of Connecticut Cottages and Gardens. 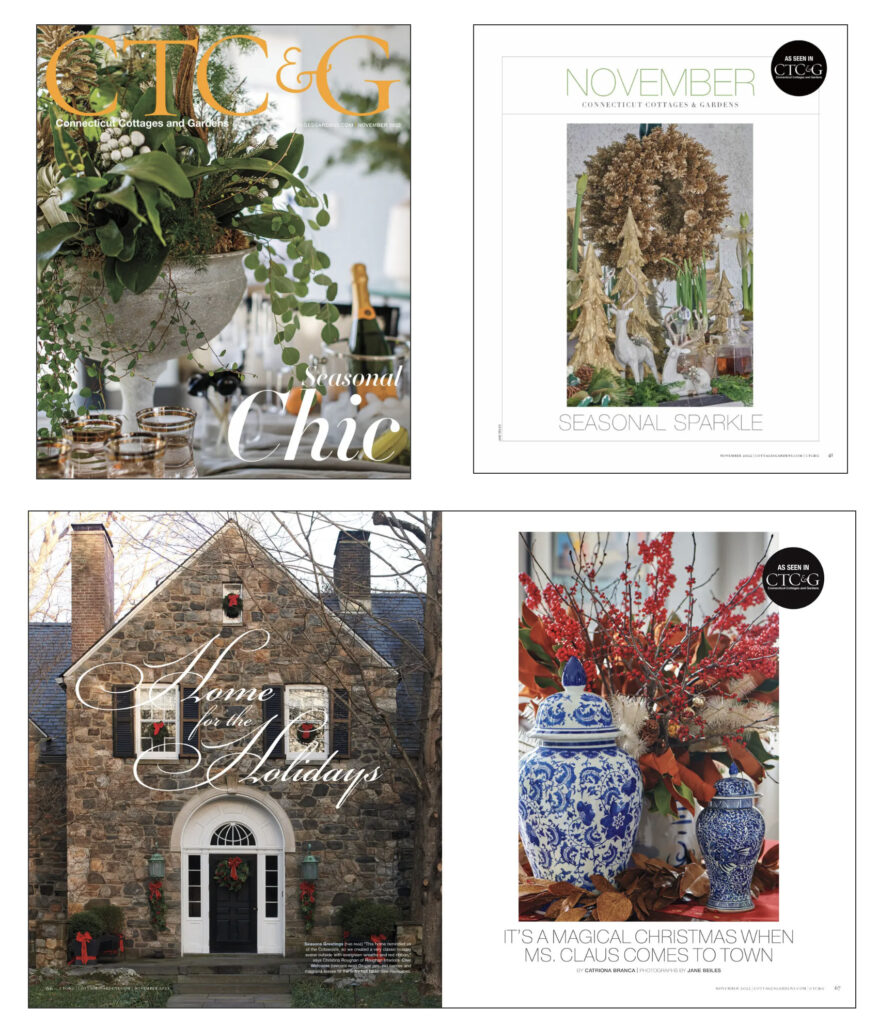 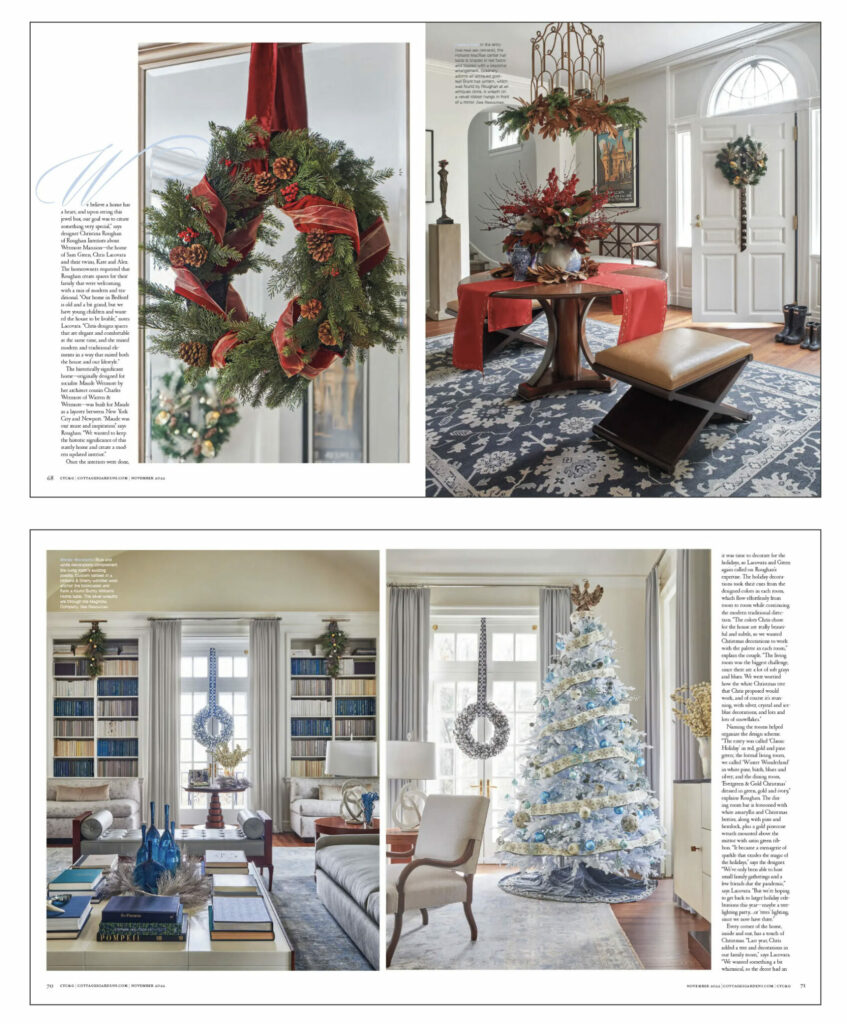 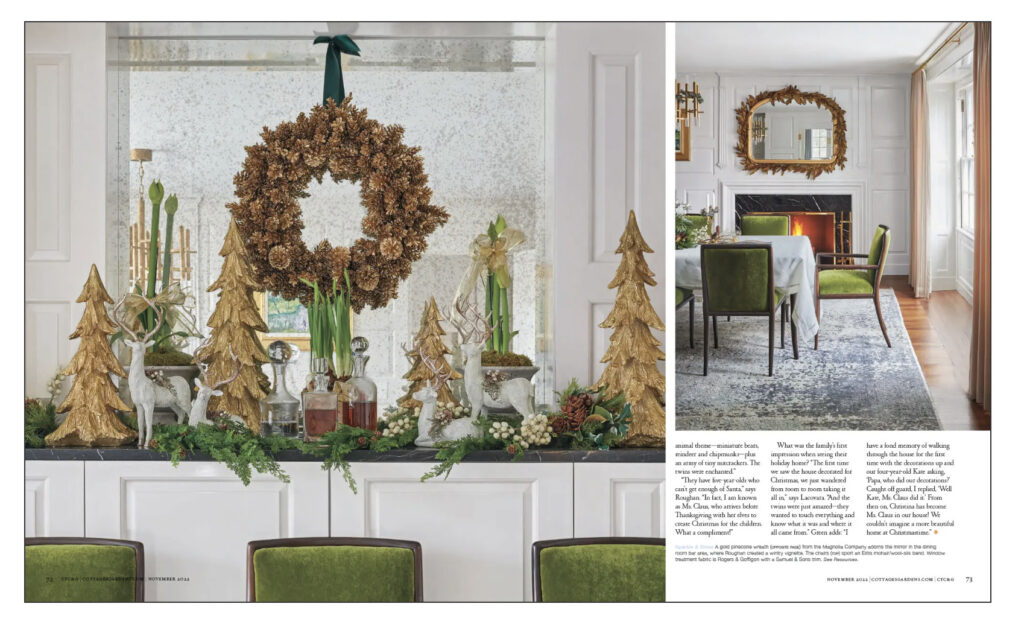 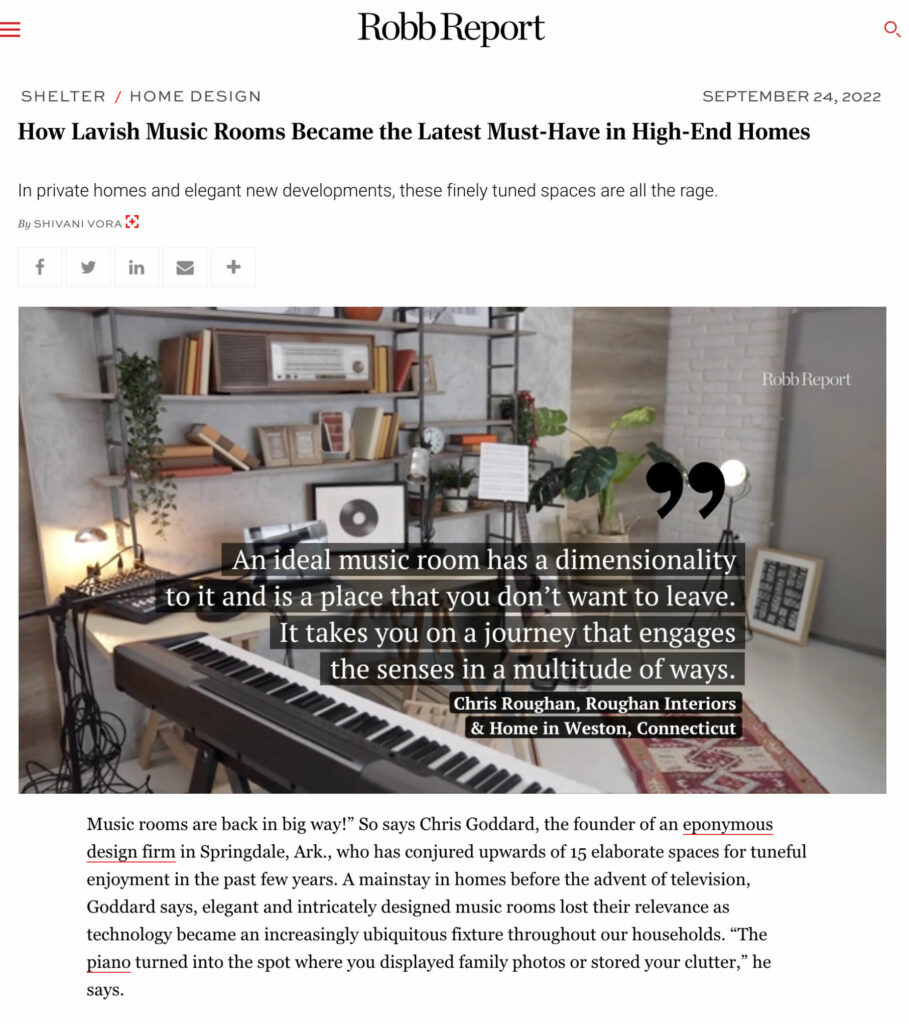 Christina Roughan shares her thoughts on an ideal music room in the article below.

In private homes and elegant new developments, these finely tuned spaces are all the rage.

Music rooms are back in big way!” So says Chris Goddard, the founder of an eponymous design firm in Springdale, Ark., who has conjured upwards of 15 elaborate spaces for tuneful enjoyment in the past few years. A mainstay in homes before the advent of television, Goddard says, elegant and intricately designed music rooms lost their relevance as technology became an increasingly ubiquitous fixture throughout our households. “The piano turned into the spot where you displayed family photos or stored your clutter,” he says.

No more. Celebrated designers such as Goddard and David Lawrence, the cofounder of the New York–based design firm Carlos David, are responding to a surge of requests. Lawrence attributes this newfound attention to the pandemic. “Dedicated places for music have become fashionable since the beginning of Covid, when people took up hobbies at home,” he says. “Music, whether it’s learning to play an instrument or taking voice lessons, became one of them and led to a demand for these over-the-top rooms.” 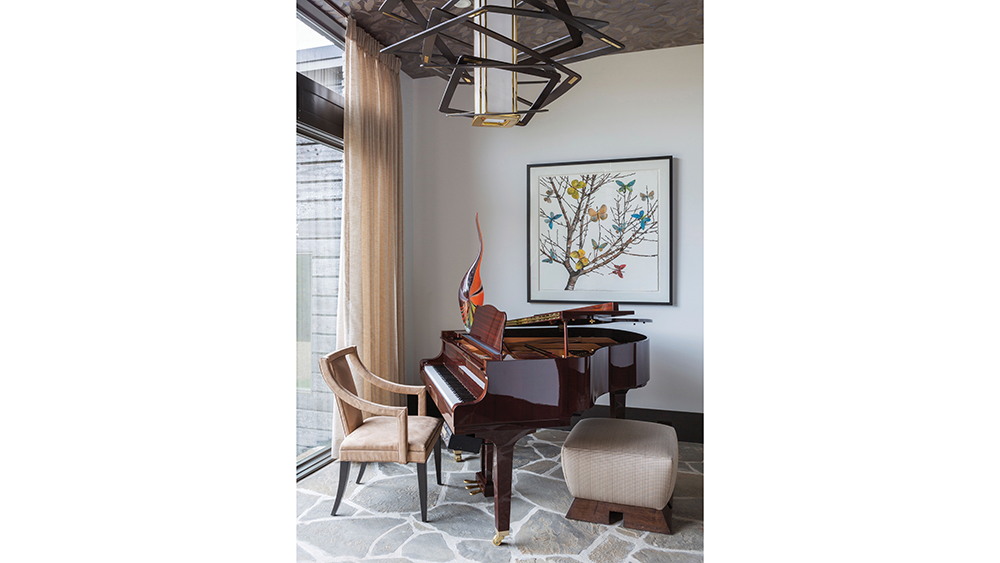 But creating such a room requires both technology and imagination. “Acoustics, of course, are the crux of the space,” says Lawrence, “and one of the best ways to maximize it is to have upholstered walls and area rugs that absorb sound but have aesthetic appeal at the same time.”

Case in point: Lawrence is currently creating a room for a New York apartment with a grand piano, upholstered gold leaf walls, chartreuse satin drapery and a vintage Gio Ponte oversized chandelier that resembles a sculpture floating in the sky. A silk area rug with lines mimicking blank sheet music is the final touch.

It’s an undertaking that can often have a budget stretching far into the six figures and reaching upwards of tens of thousands of square feet. One example was for a couple in Bentonville, Ark., who live in a large French-inspired château and have several grandchildren who are learning piano. “They wanted a beautiful place for them to play,” says Goddard.

Located in the home’s foyer, the room he conceived features a restored antique grand piano as its centerpiece. Other elements include custom-made runners, a marble floor and a domed ceiling that all bounce sound and upholstered silk walls that help absorb it. The space is wired to the château’s sound system, says Goddard, so the piano can be heard throughout the house.

“The room, like the others I’ve designed, resembles a small theater with a dramatic setting,” he says. In a throwback to a bygone era, some designers are playing up the drama by incorporating embellishments into their music rooms that encourage socializing. 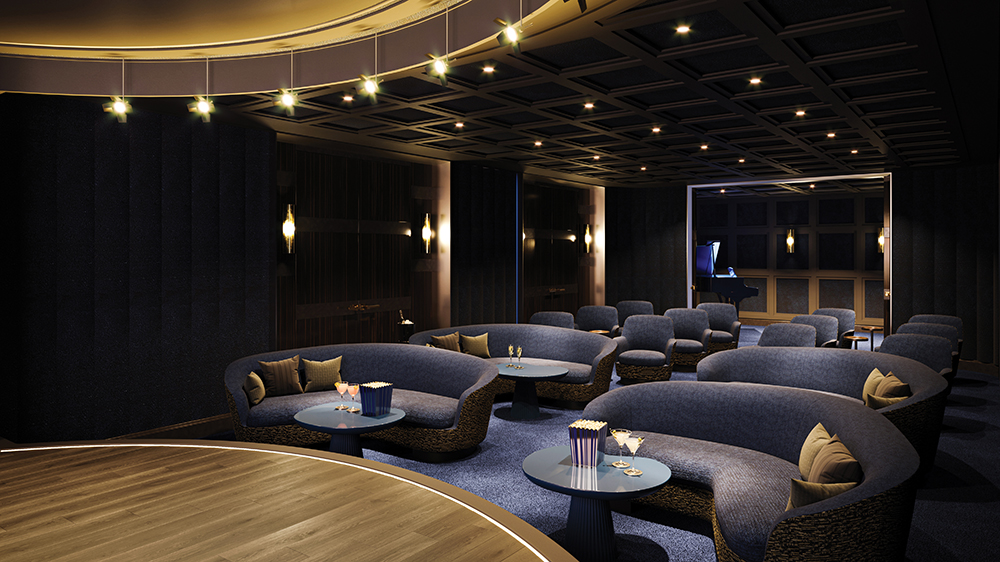 A cozy-yet-chic music-enjoyment room at the Towers of the Waldorf Astoria in Manhattan.
Noë & Associates/The Boundary

Edward Yedid, a partner at the New York design practice Grade, for instance, is designing one for a Manhattan residence with a backlit bar that’s hidden behind pivot-pocket walnut doors. “It has antique glass cabinets with metal trimmings and a countertop of marble in lavender and green,” he says. “And, as a fun surprise, there’s a hidden room with a guitar display and second bar.”

Elsewhere, the designer Chris Roughan, of Roughan Interiors & Home in Weston, Conn., created a large music room for a family in Greenwich to practice piano, guitar and violin. The space also had to be fit for entertaining with cocktails and canapes before dinner, she says. “We wanted the room to feel extremely special, so we added faux croc black walls mixed with red music stands and incredibly strong art that our client collected,” says Roughan. “The vintage Scolari light fixture in polished nickel is the real statement-making piece.”

Phillip Thomas, founder of the eponymous New York–based design firm, says that he also strives to emulate an ambiance of conviviality in his music-room projects. But no matter how grandiose, he says, the rooms must showcase their technical aspects. “In contemporary interiors, we often make every effort to hide AV equipment with racks tucked away in closets and speakers behind plaster walls,” he says. “However, music rooms are completely different. These are spaces where the experience of music and the components and instruments related to it should be proudly displayed and exalted.”

Guitars and pianos are works of art in and of themselves, says Thomas, and deserve to be shown off. “They have a sculptural quality to them,” he says. “But it is key to control the space’s humidity levels to preserve their condition.”

Private homes aside, new luxury residential developments, mainly in New York, are part of the music- room resurgence with their own prominent renditions. 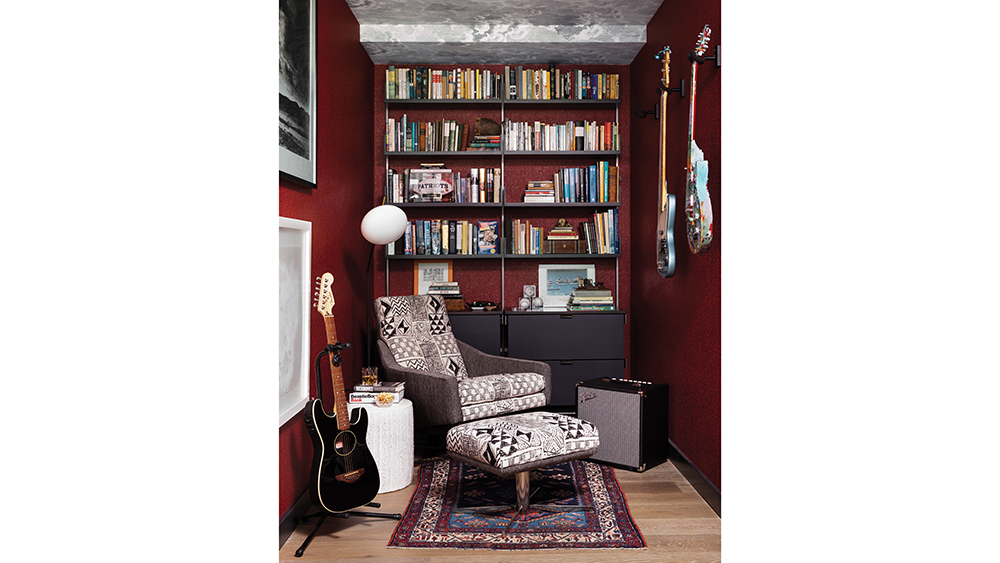 The condominium 378 West End Ave., for one, has a decked-out music room with a soundproof recording studio. Two Fifty West 81st., a new condo on the Upper West Side, features a recording space designed by Robert A. M. Stern Architects along with a designated area to arrange, compose and mix tunes.

In another lavish example, the West Side’s Waterline Square has a 2,000-square-foot David Rockwell–designed music room with a baby grand, a glass-walled recording studio and pyramid wall cladding that absorbs sound. Ultimately these are spaces that encourage lingering and inviting musicians, both aspiring and established, to loosen their inhibitions and unleash creativity.

“An ideal music room has a dimensionality to it and is a place that you don’t want to leave,” says Roughan. “It takes you on a journey that engages the senses in a multitude of ways.”

Read the article on www.robbreport.com

We are loving bringing home living outdoors! We are excited to share our latest New Canaan project. 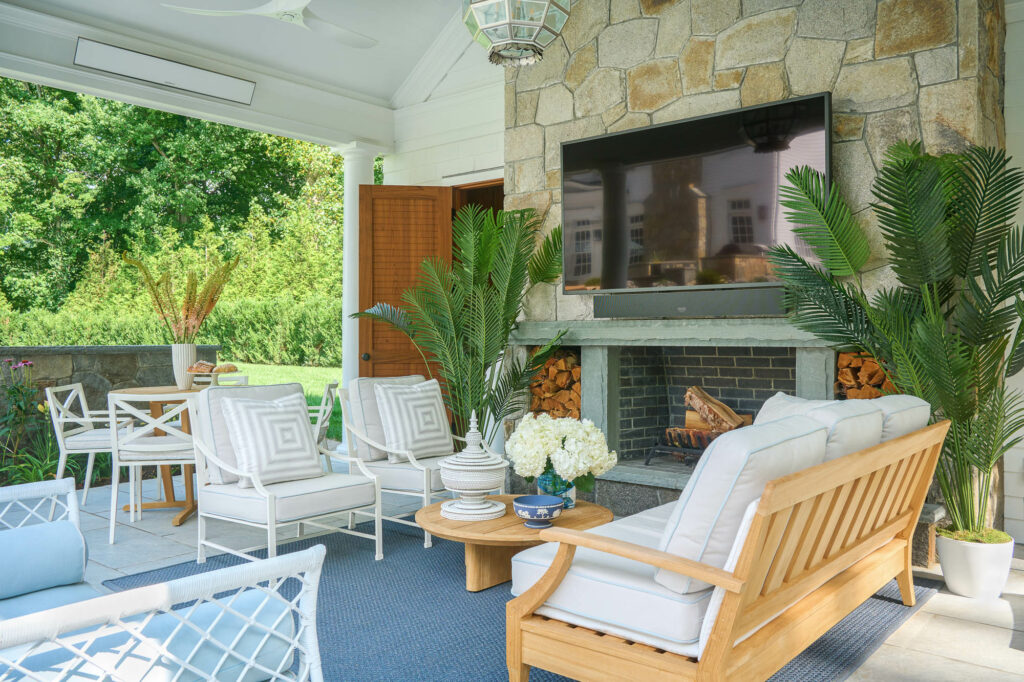 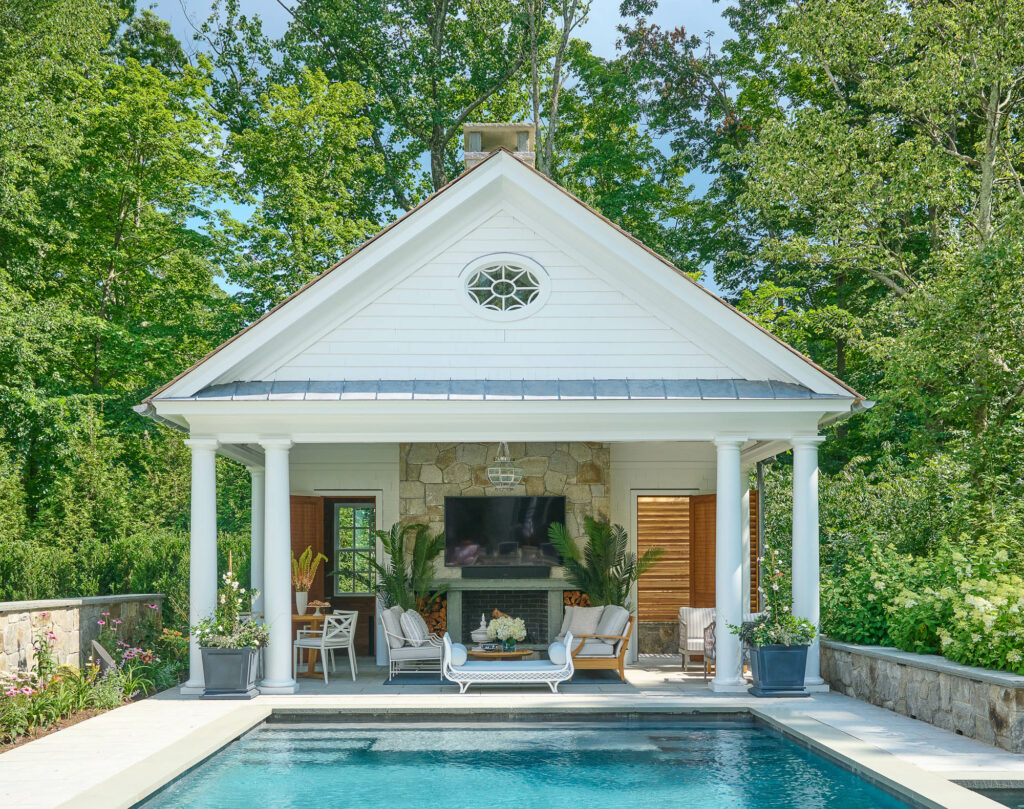 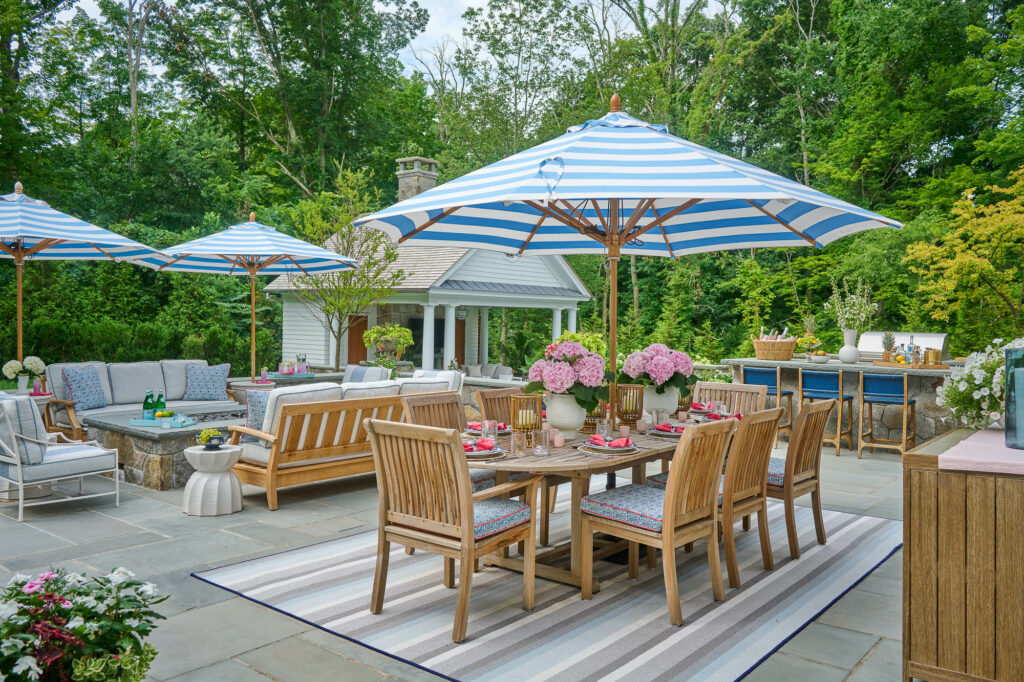 View more photos of this summery Country project in our Portfolio.

We are thrilled to share our latest outdoor project. 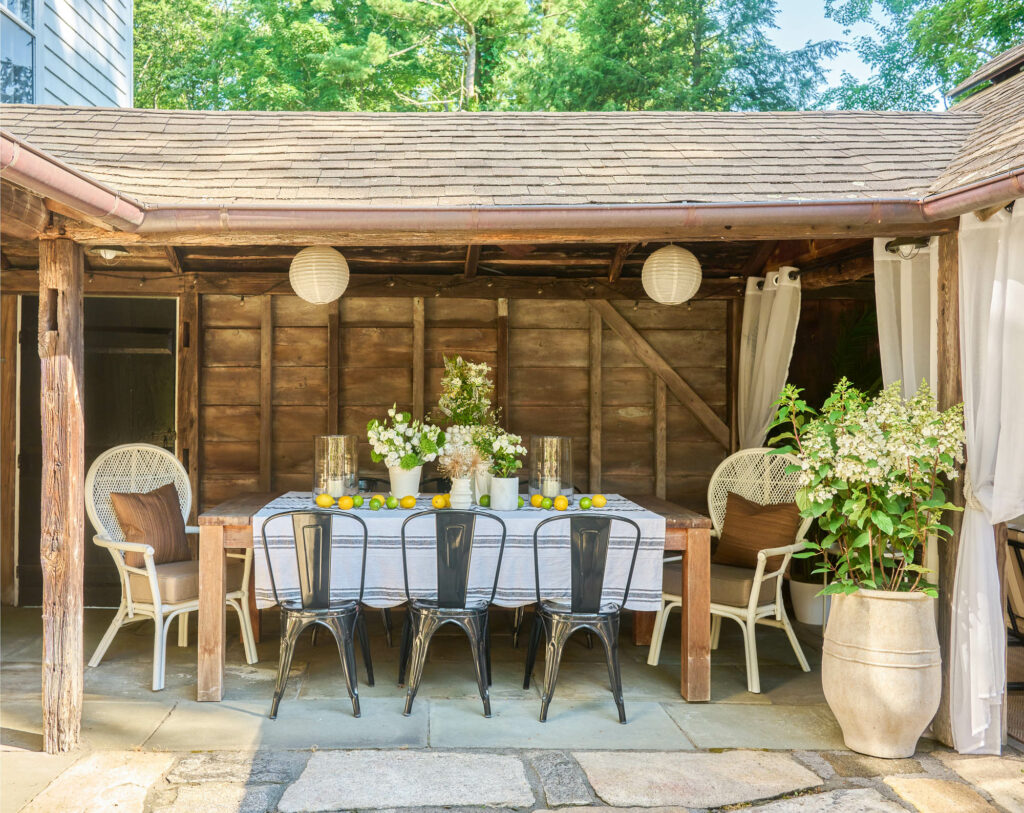 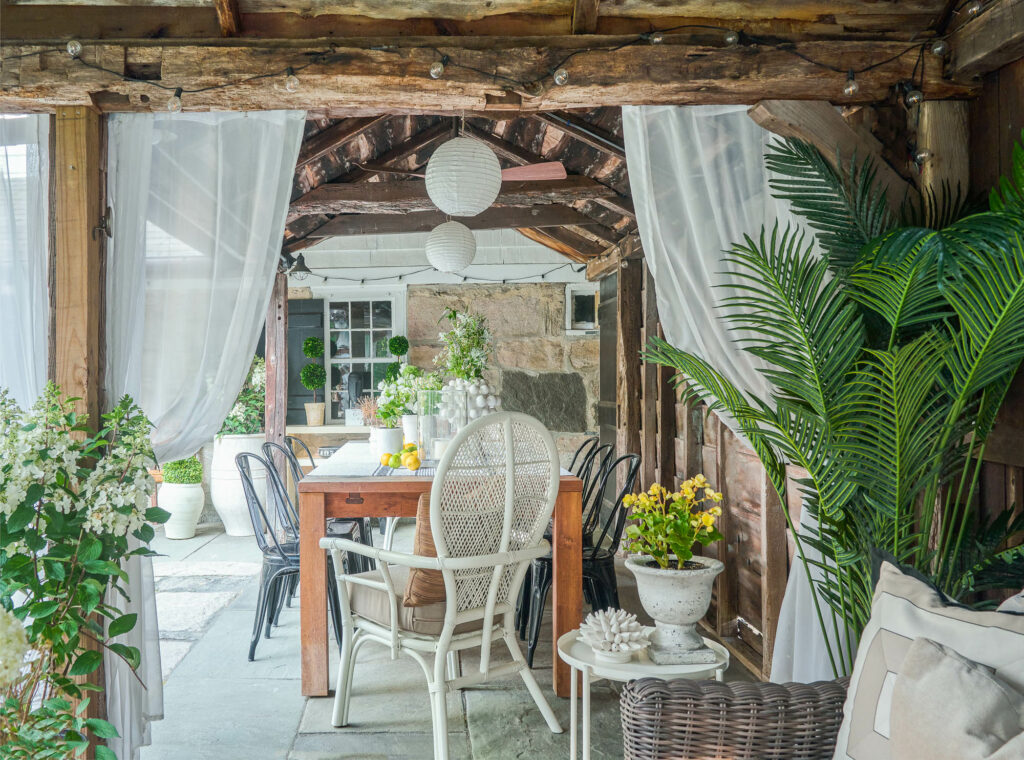 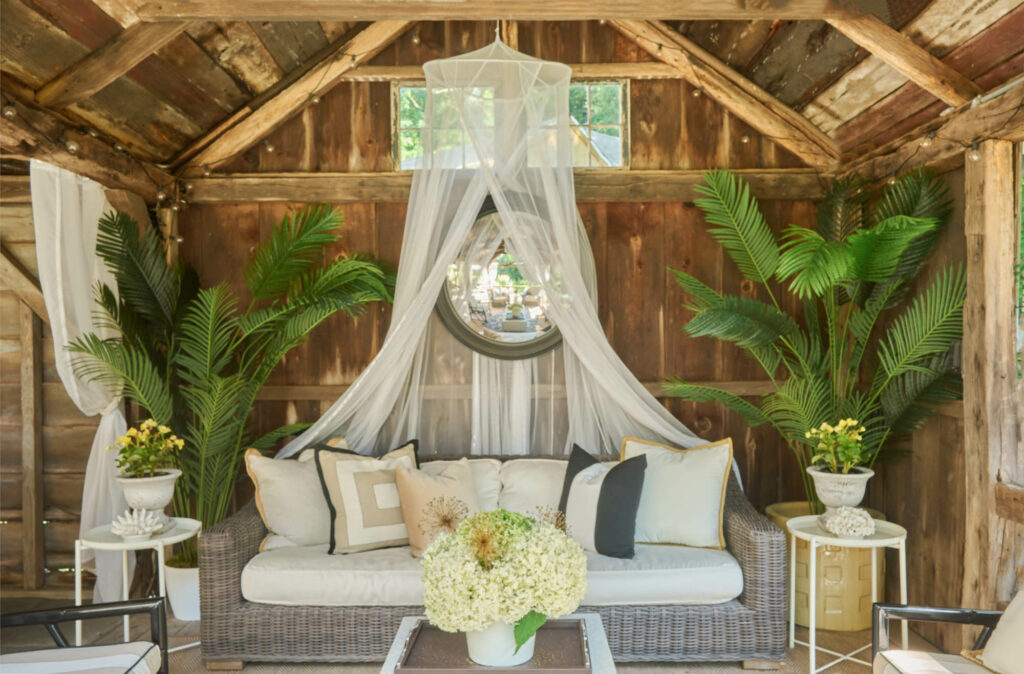 See more images of this Country project in our Portfolio.

We’re honored to have our wonderful project featured in the July/August issue of Bedford & New Canaan magazine. You can view this project in our Portfolio. 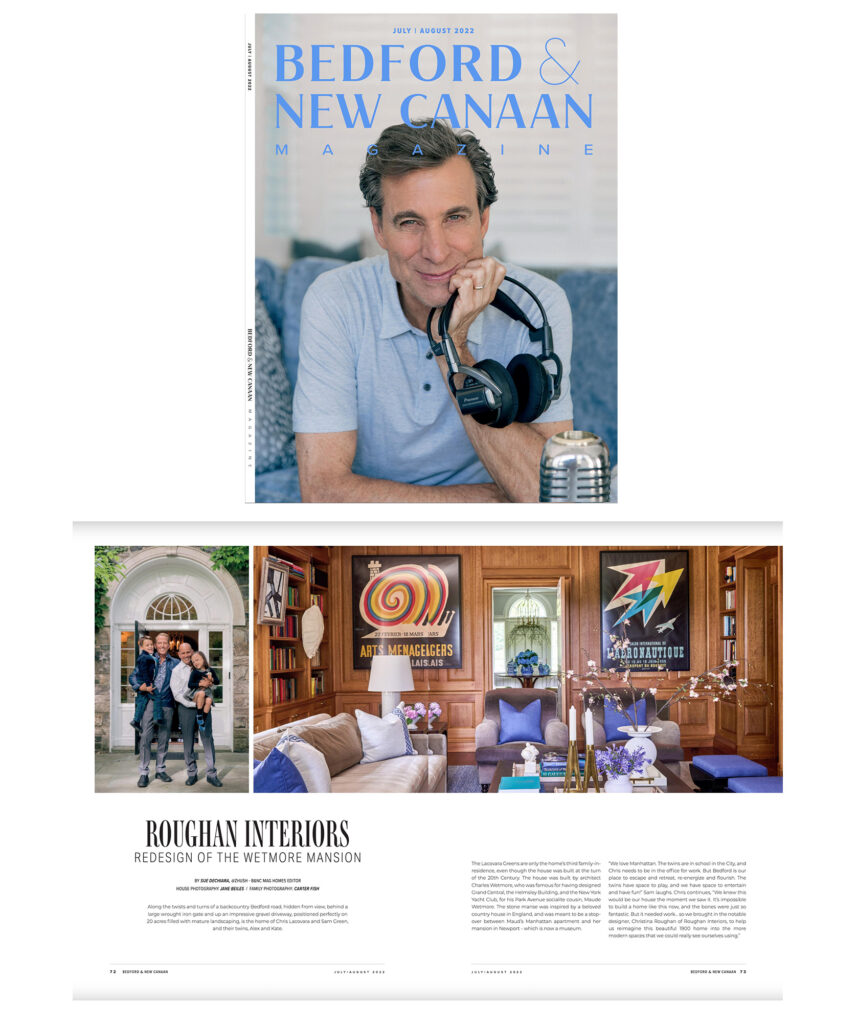 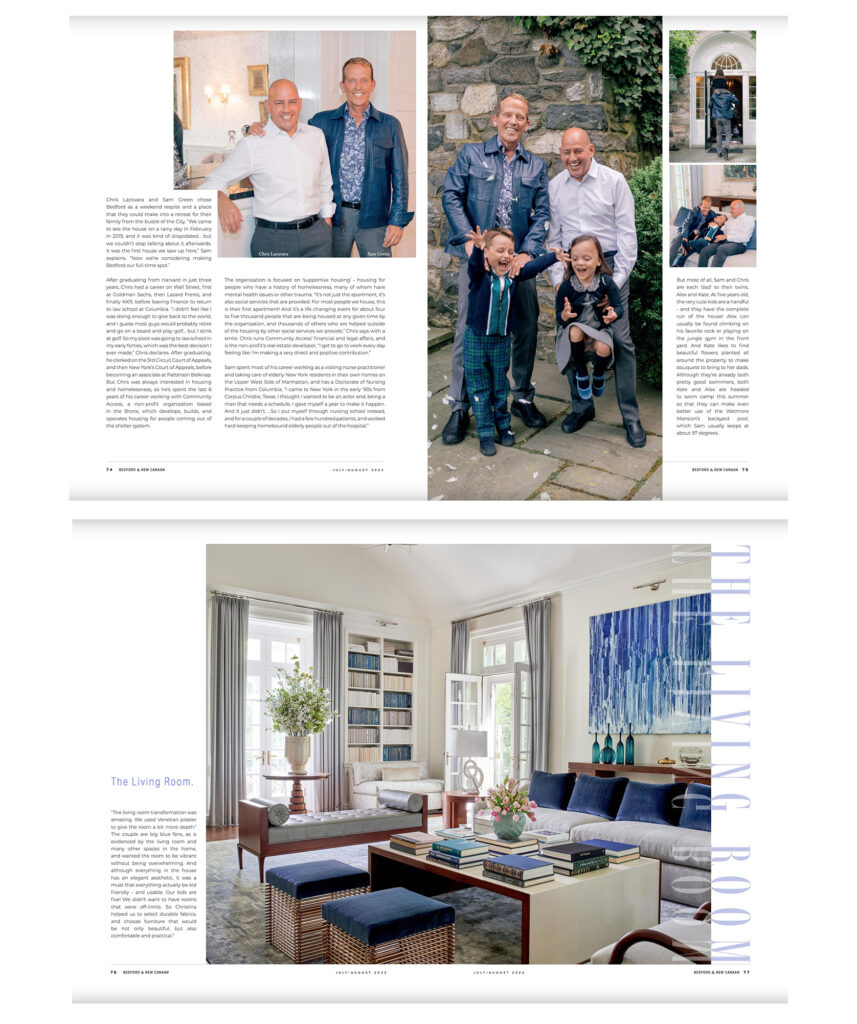 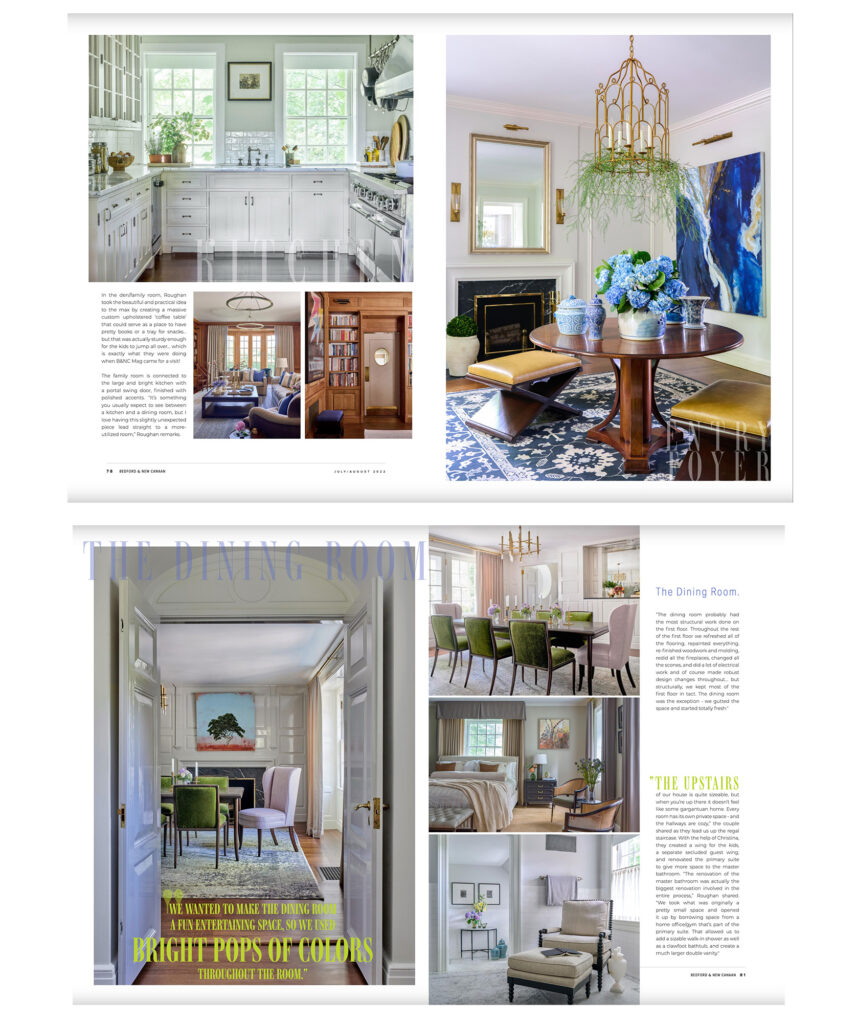 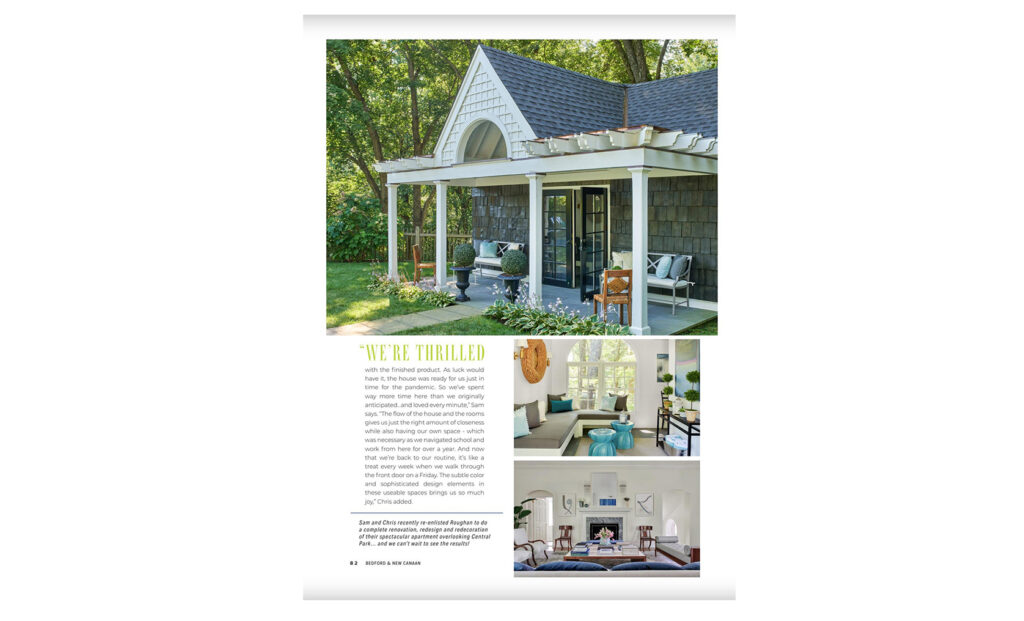 We are honored to have our Indoor-Outdoor Room project featured in the latest issue of Greenwich Magazine June 2022. View the entire Classic Georgian Estate project in our Portfolio. 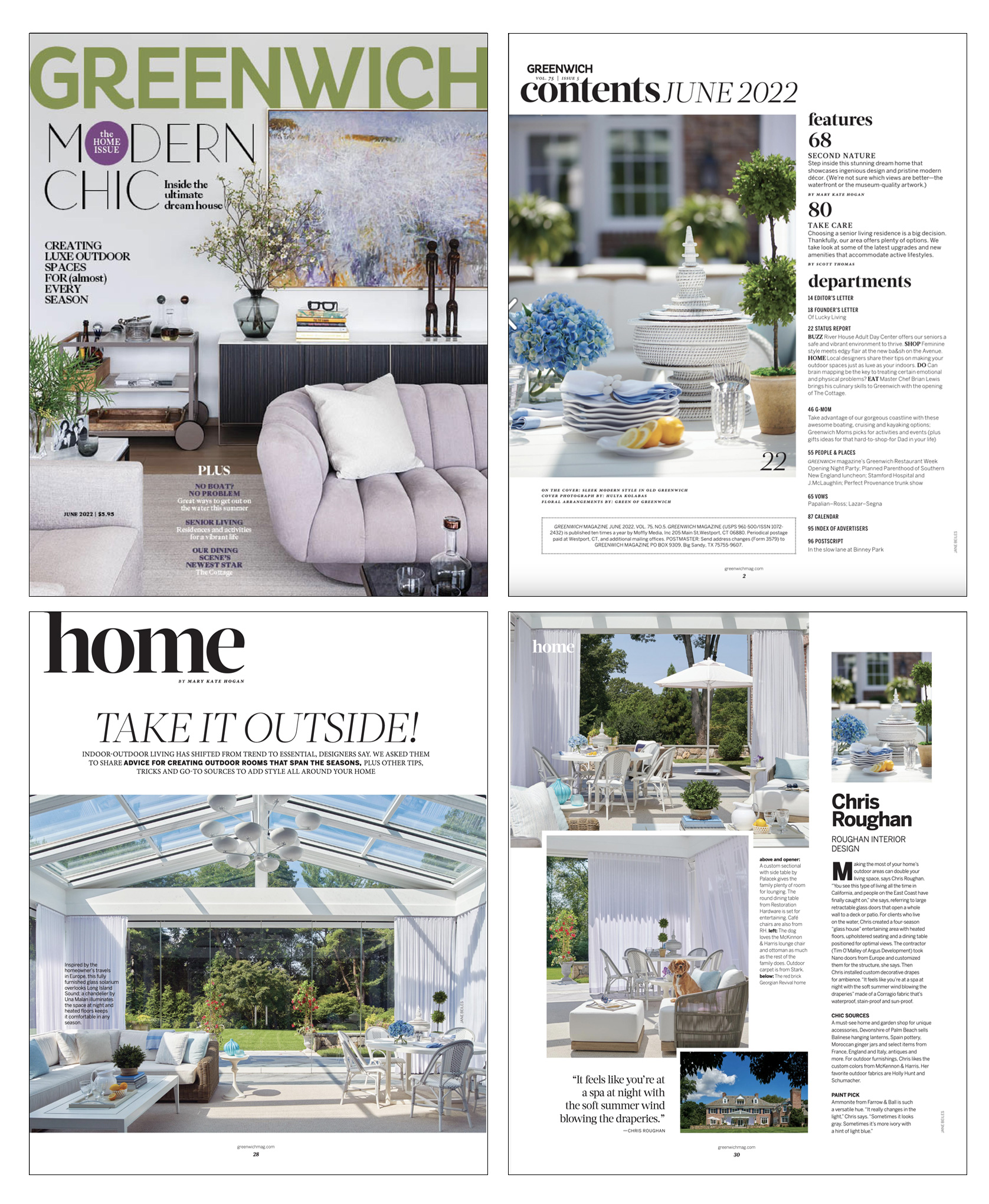 We are featured in the June 2022 issue of CTC&G’s with great company in the “Posh Powder Rooms + Dream Baths” Article. 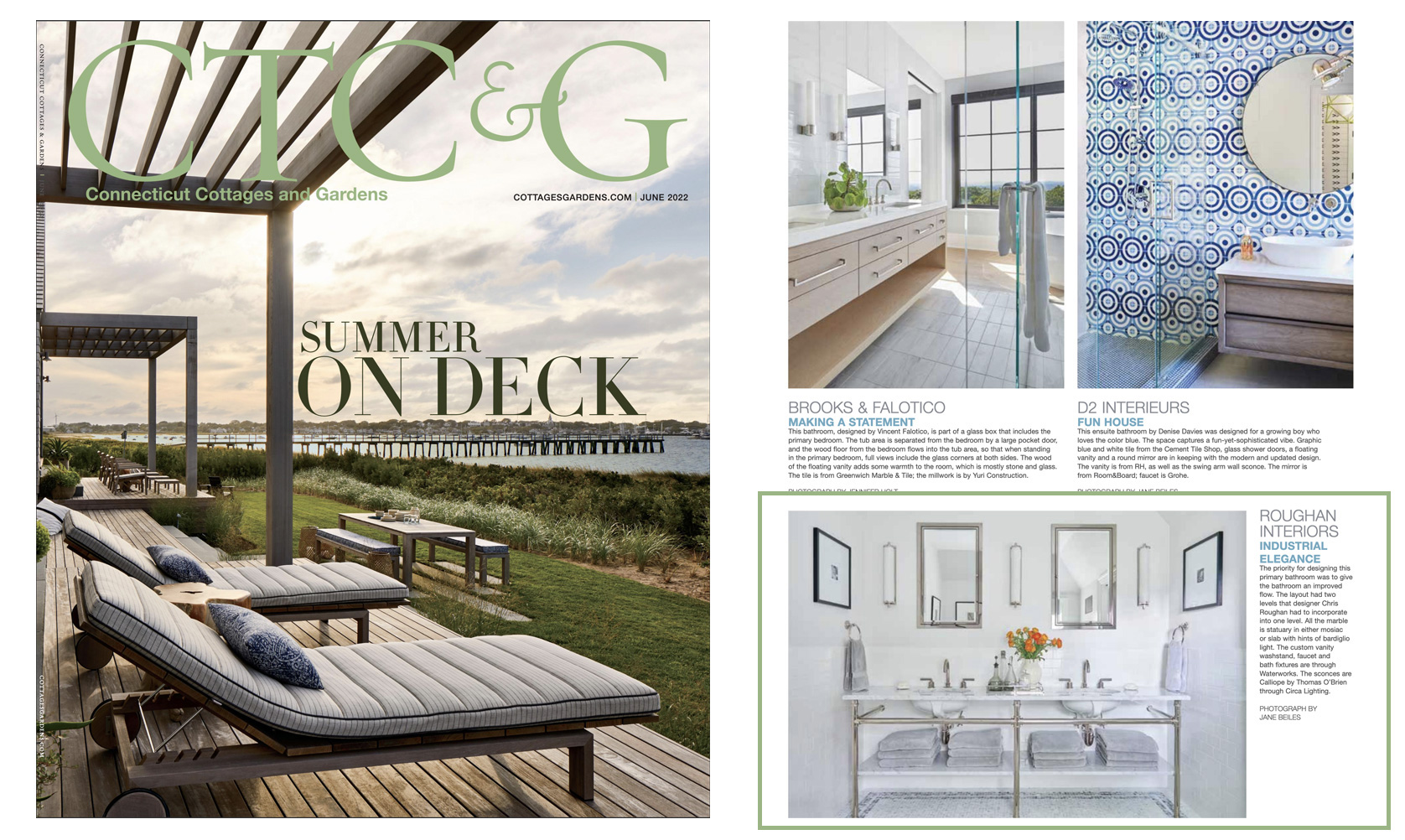 Our Design Studio Featured in Wesport

We are so thrilled to have our office space featured in the May/June 2022 issue of Westport Weston & Wilton Magazine. 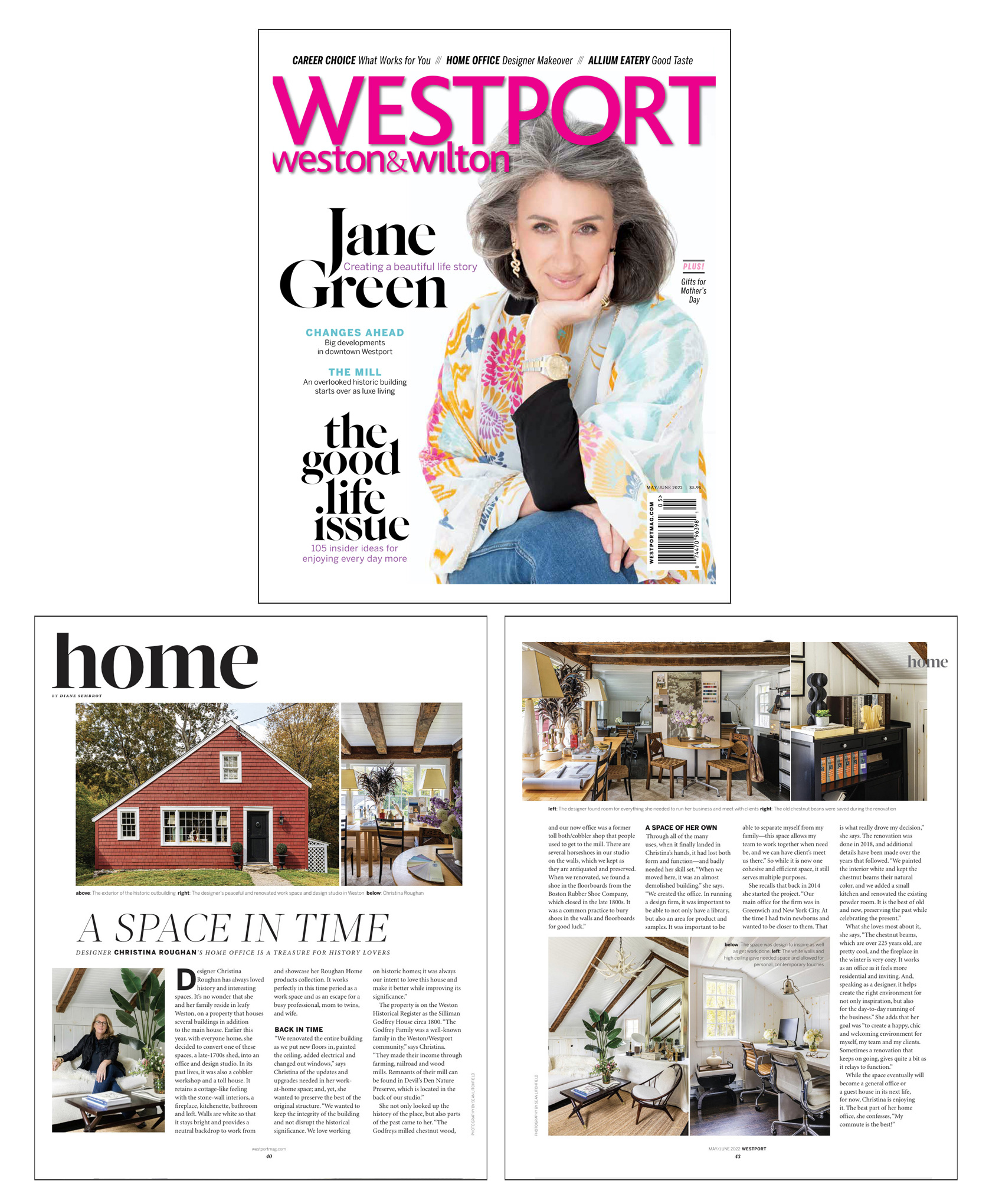 Such an honor to be featured in the latest Lux Lifestyle Magazine. You can find the latest issue at www.luxlifestyle-magazine.com. 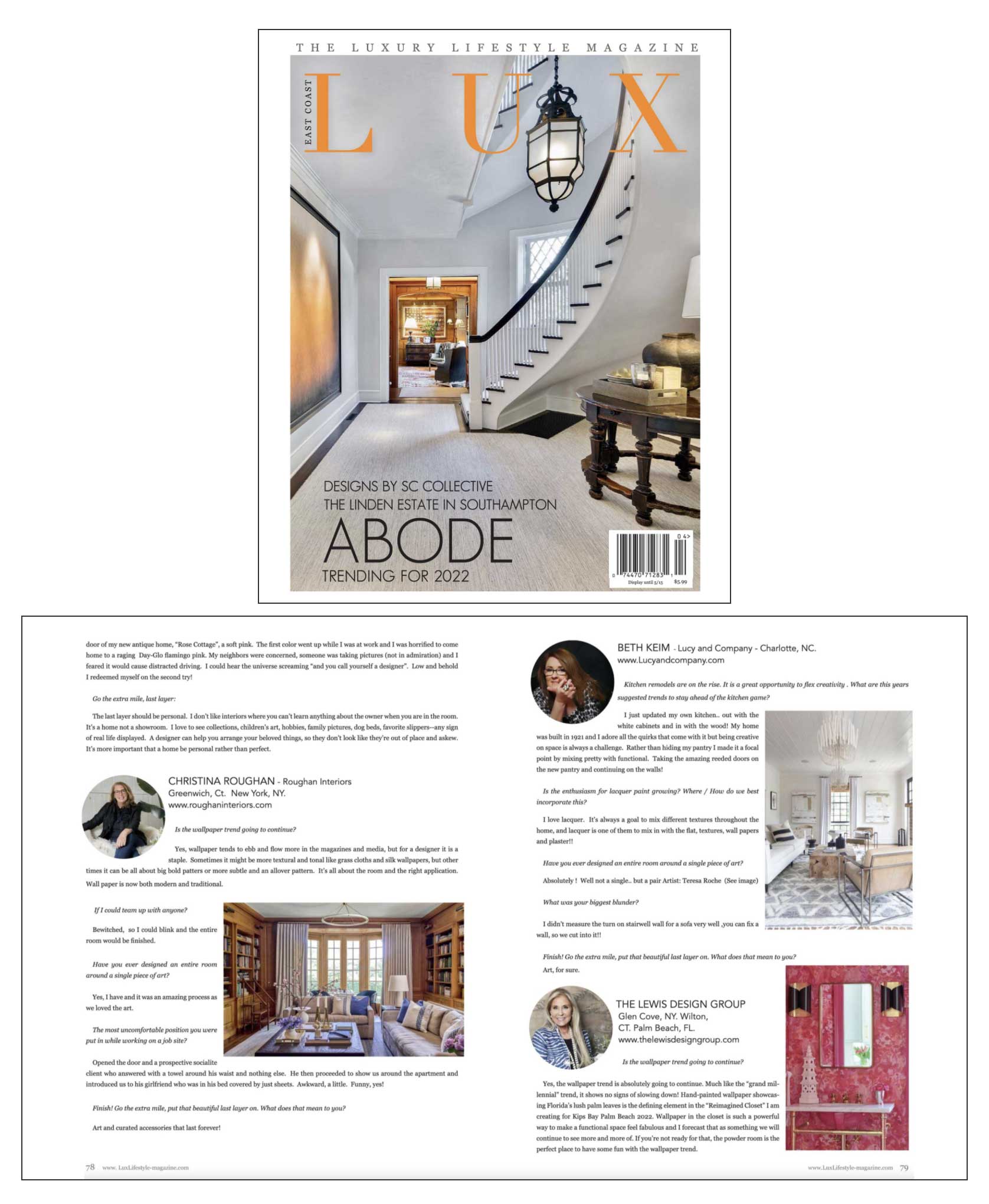 We are so excited to be quoted in the Cottage & Gardens Design Guide 2022 featuring 8 of Chris’s coveted stores to shop. 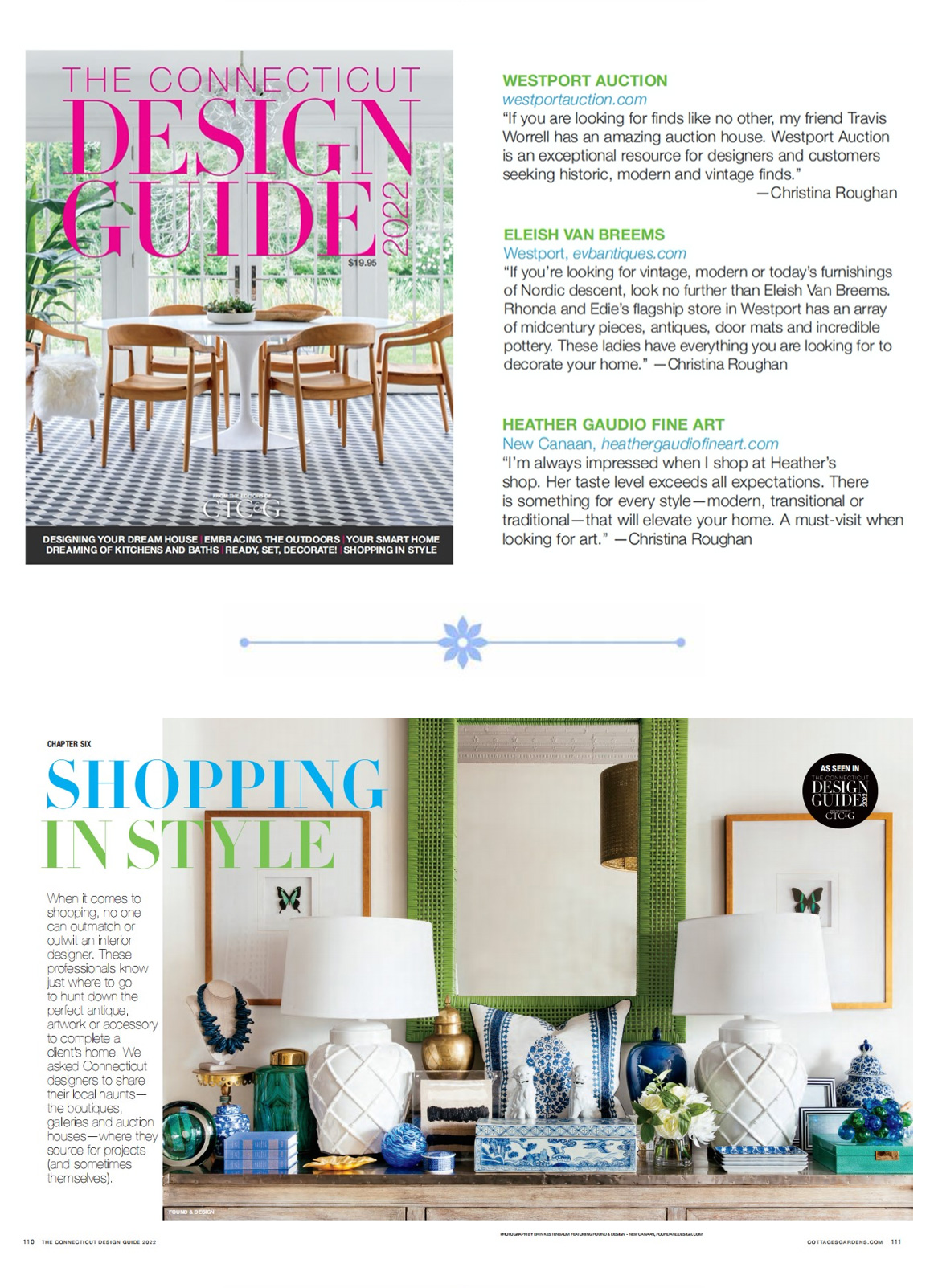 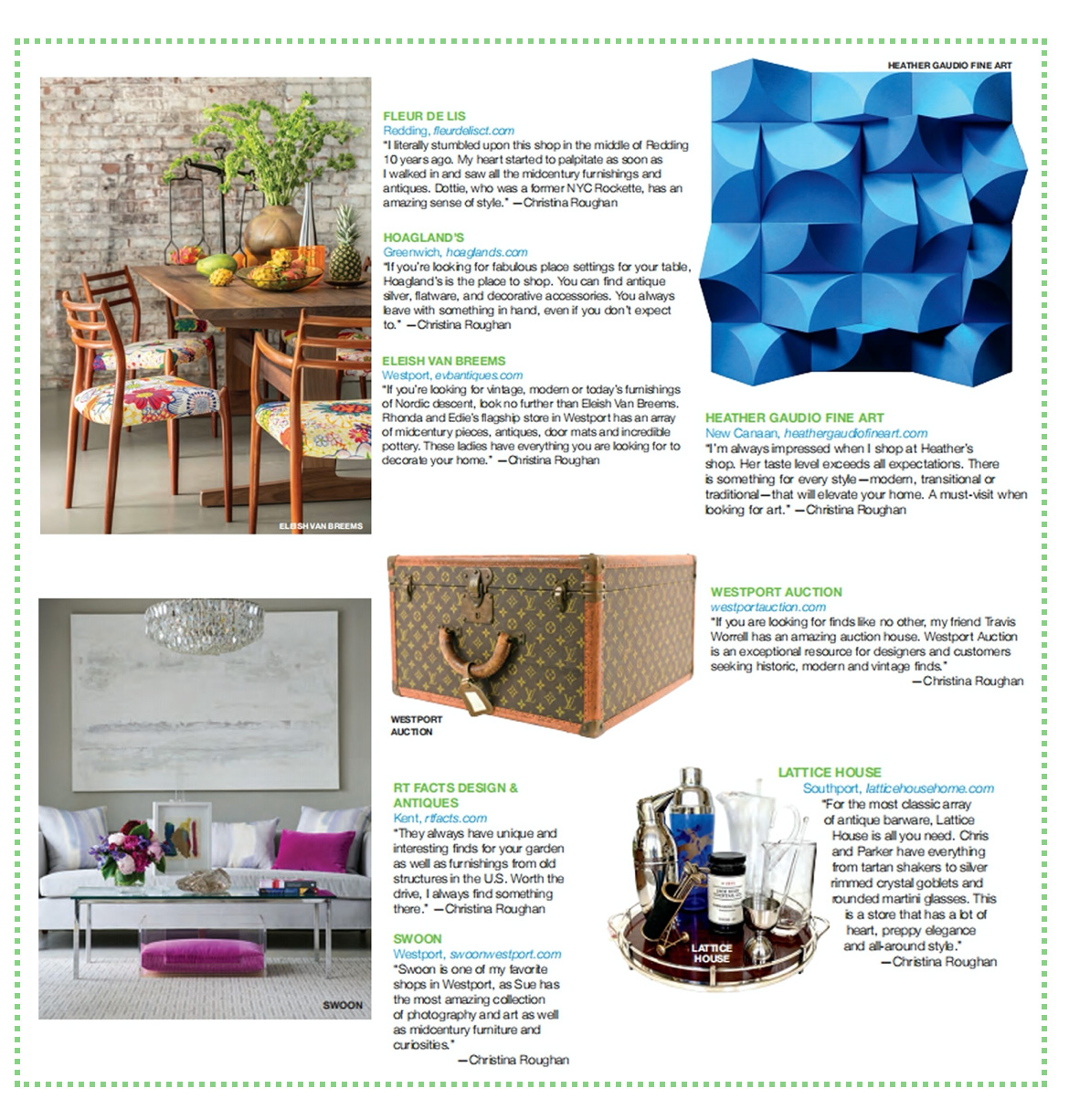 We are delighted to have our design studio cottage featured in October’s issue of New England Home, Connecticut. View the entire project in our Portfolio Section. 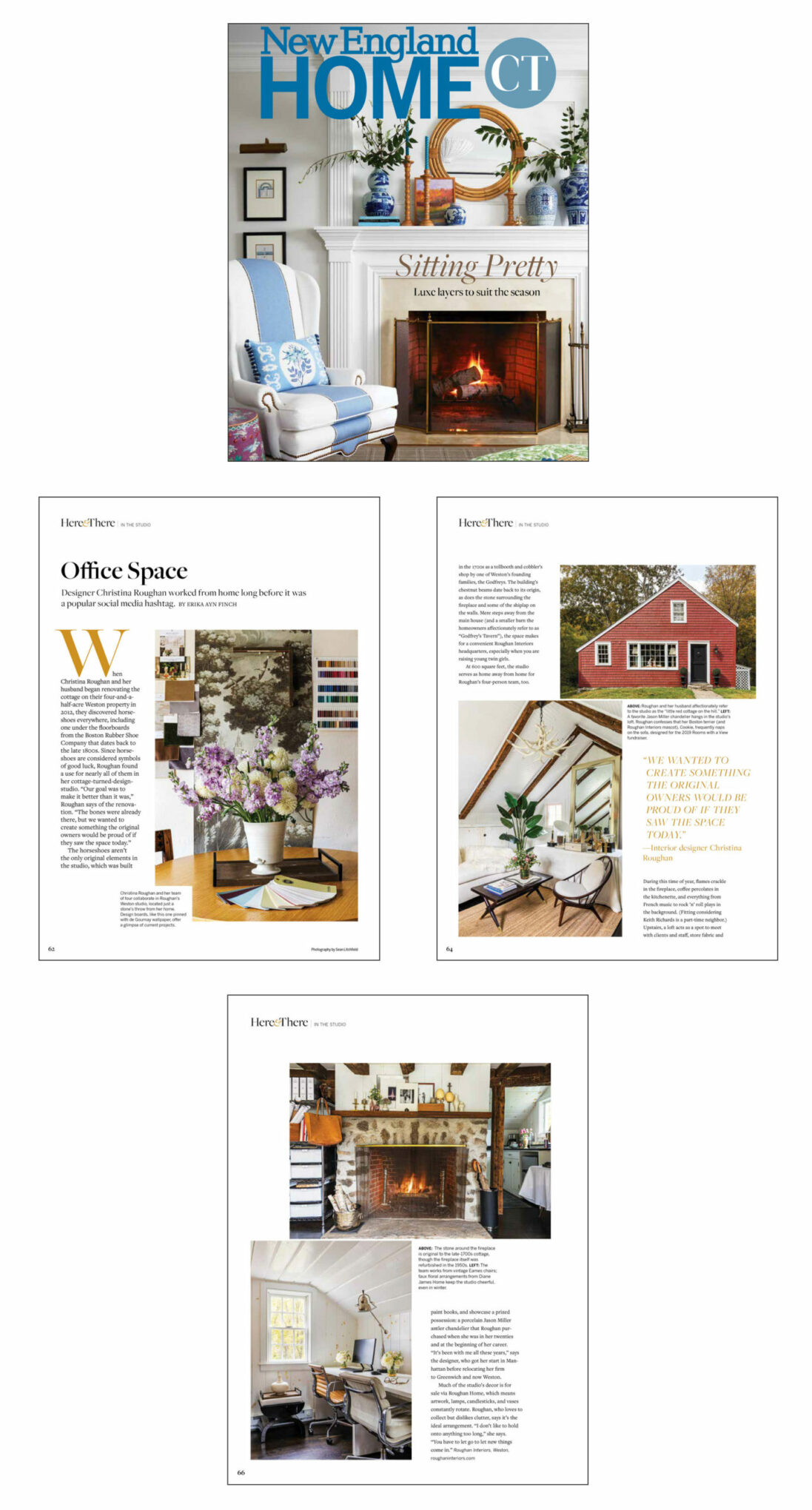 We are thrilled to share our latest Brooklyn City Project named The Standish. You can view the rest of the project images in our Portfolio. 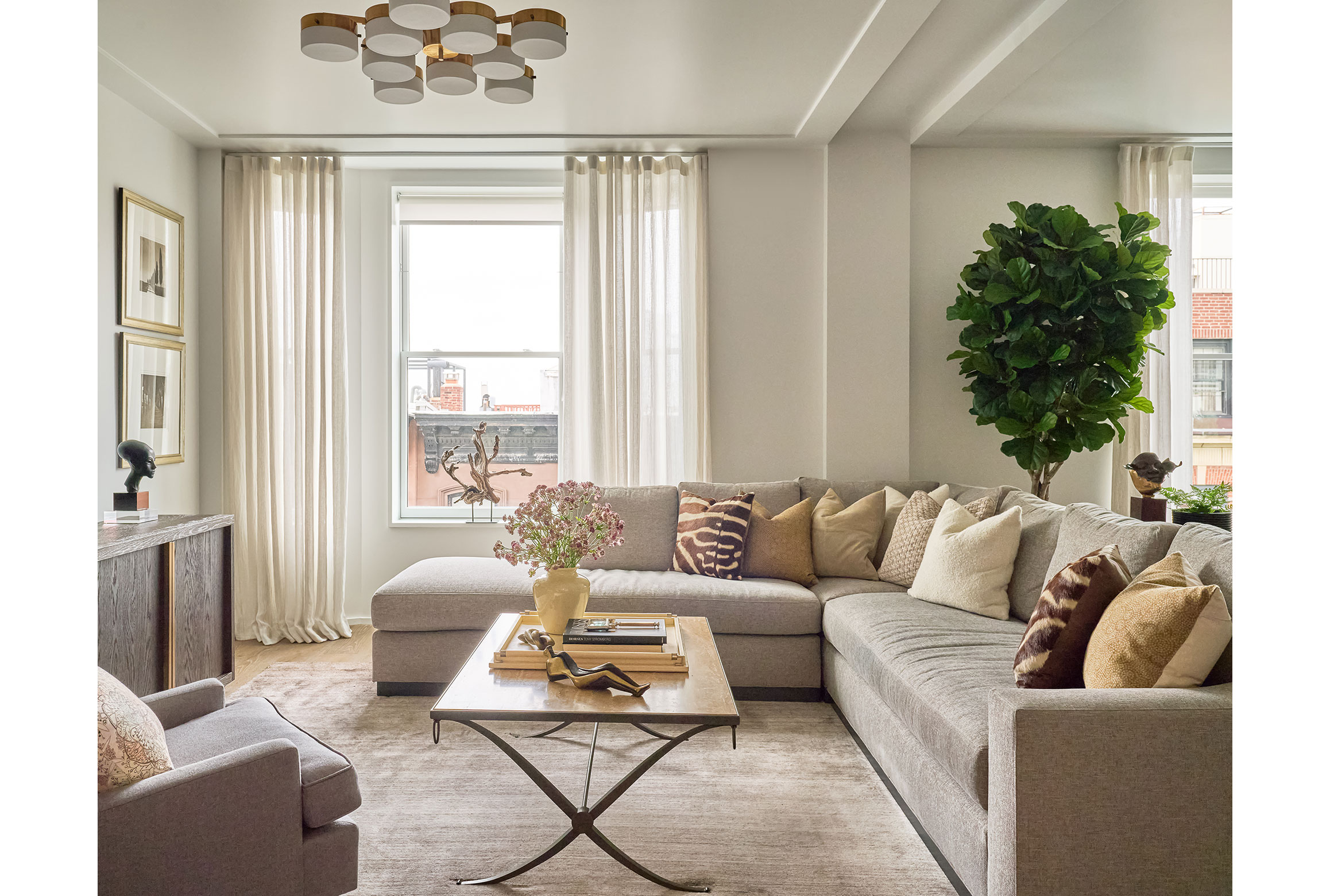 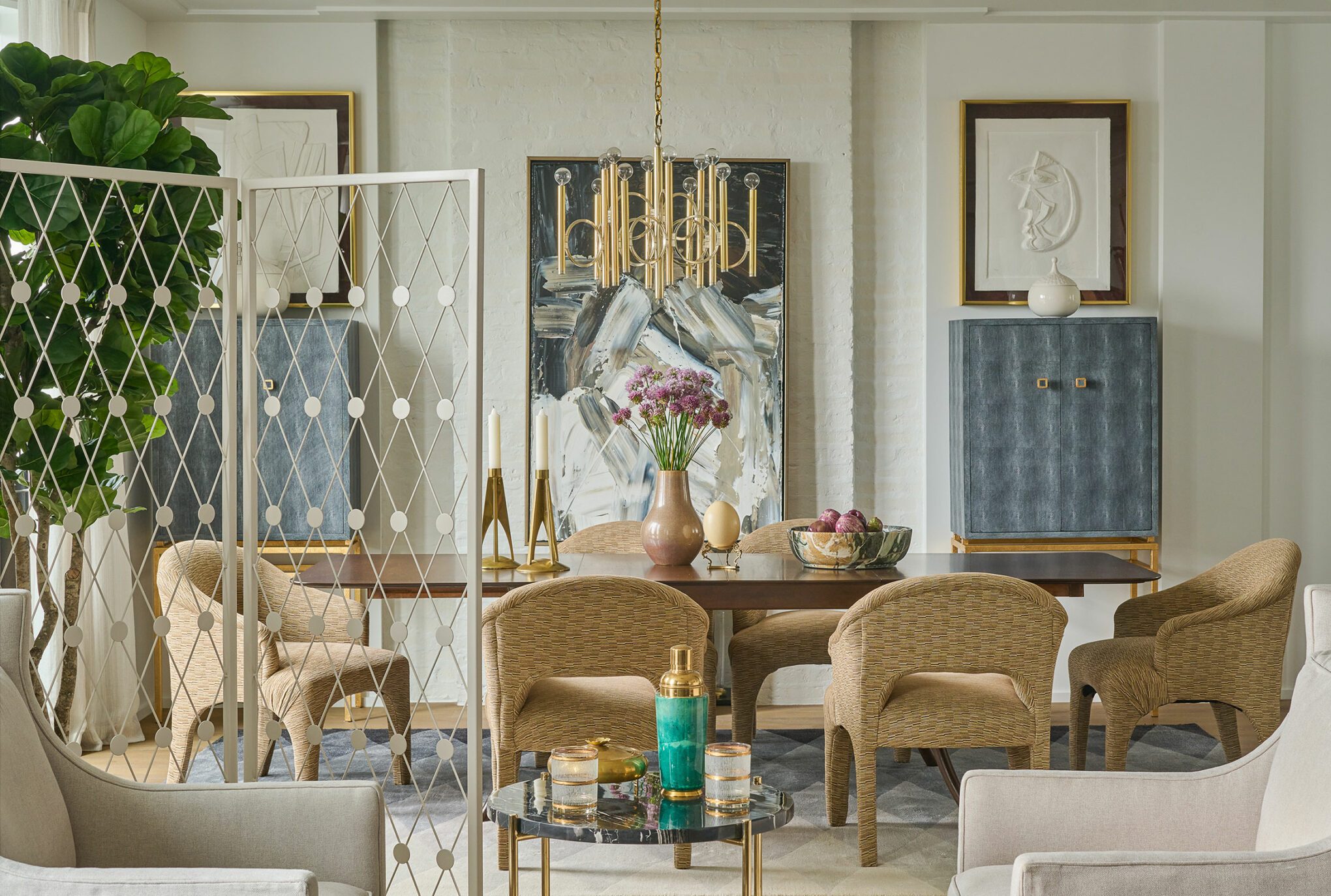 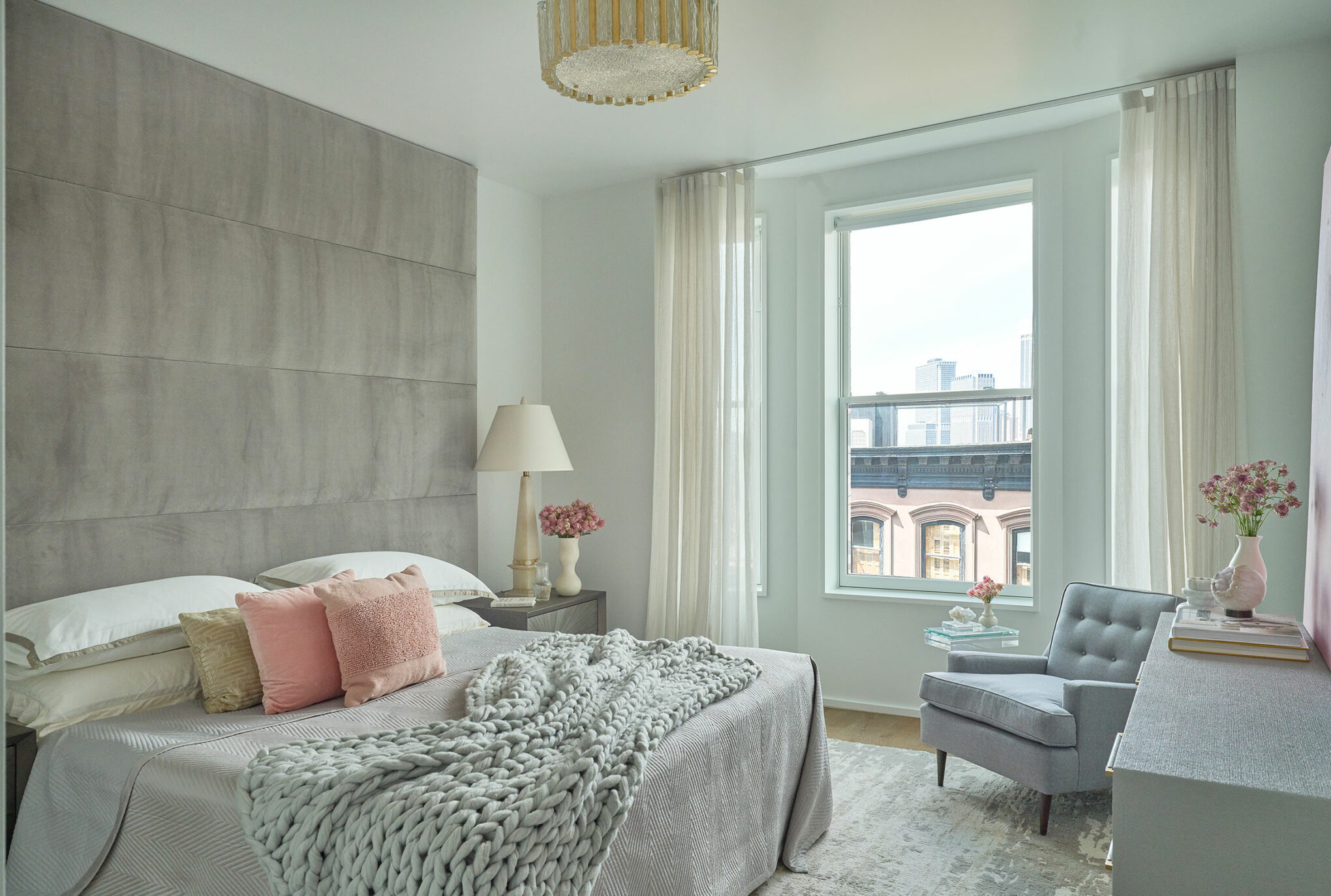 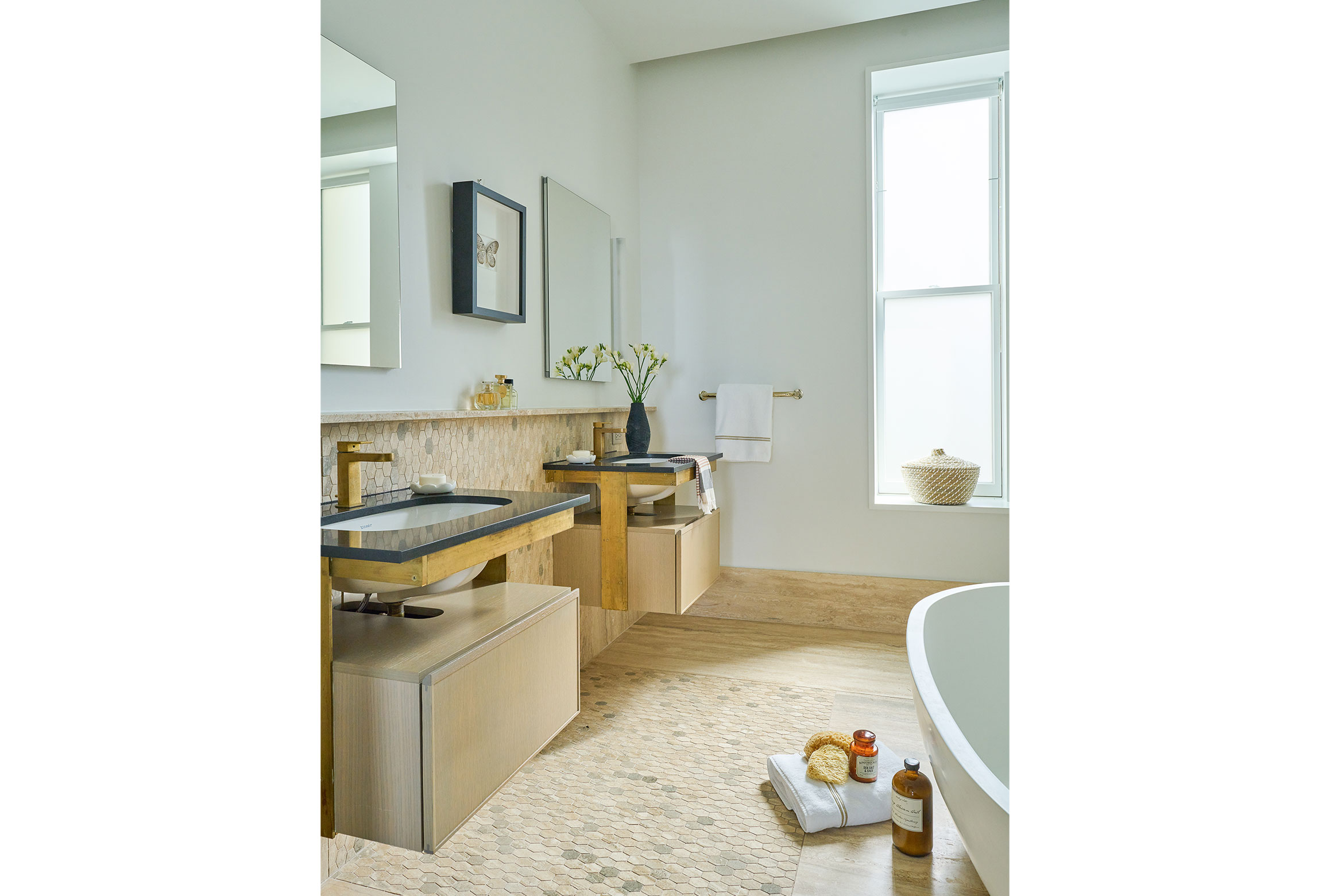 See more images of this City project in our portfolio.